Trekking through the jungle on a mission to find a missing plane while dodging spiders, scorpions, snakes, and crocodiles sounds like a scene from a movie. But for the late Bryan Moon and MIA Hunters, it is just part of the mission.

During World War II, more than 76,000 U.S. soldiers went missing. MIA Hunters, a non-profit organization, has worked for over 20 years, setting personal safety aside, in an attempt to locate the crash sites of missing WWII airmen.  Its initial mission was to locate U.S. airmen, but has since expanded to all nationalities that fought in the war.

MIA Hunters’ crewmembers are volunteers who pay their own expenses, typically around $14,000, and haul their own supplies through the jungle. On each mission, Moon and his crew hired local scouts and native guides, spoke with elders who may remember the crash location, and then searched for the wreckage.

Of course, things don’t always go according to plan. Crewmembers have been chased by warring tribes, airlifted to safety by helicopter from the top of a mountain, and forced to flee gunfire.

When a mission is successful and the wreckage of a military plane is located, they place the downed pilot’s national flag at the site and offer a prayer. The sites are treated as hallowed ground and left as undisturbed as possible. It is common for natives to have previously buried the deceased soldier and still be preserving the crash site.

MIA Hunters was recognized by the U.S. Department of Defense in 2009 as the most successful civilian assistance group for locating missing soldiers. Through their missions, MIA Hunters have located over 80 American, Japanese, German, and Italian MIAs.

At times, searches have to be aborted, but the approximate location, firsthand accounts from local villagers, photographs, GPS coordinates, and any other helpful information is sent to the POW/MIA Accounting Agency in Hawaii for future recovery and identification of the remains. The information could help answer questions about what happened to hundreds of other lost airmen.

During one of their missions, Moon’s crew traveled to remote regions of China in search of the remains of the B-25 aircraft flown by the “Doolittle Raiders” during the historic 1942 bombing mission on the homeland of Japan after Japan’s attack on Pearl Harbor.  The group was able to locate 3 bombers.  An identifying piece from one aircraft is displayed in Davis Law Firm, along with letters from General Jimmy Doolittle himself. We invite you to come in and see this special piece of history. 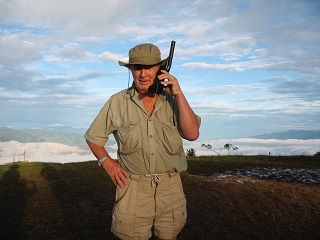 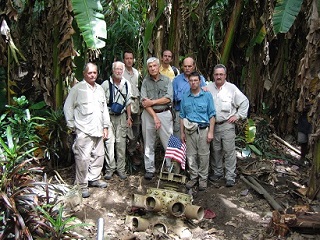